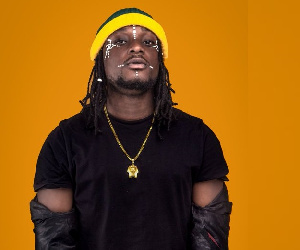 Even though Epixode was also nominated in the same category that Ras Kuuku emerged as the winner, he told Chelsea, host of the YFM Takoradi’s Ryse N Shyne show “Ras Kuuku deserved it. I would not have voted for anyone apart from Kuuku. I am so happy for him”.

The ‘Wahala Dey’ hitmaker, disclosed that of all the nominations that he had, he was especially proud to be nominated under the songwriter of the year category.

“I was just like any artiste going to the VGMA hoping to win. Last year I only got a nomination and this year, it is four. And the greatest part is the Song Writer of the year which I knew, however, that Kofi Kinnata would win hands down”.

Epixode seems not to be bothered about not winning any awards at the VGMA awards as he expressed that he feels fulfilled after he was nominated in four categories of the awards scheme.

“This is my first time in that category [Songwriter of the Year] and that is huge for me. For my name to be there is a huge thing for me. Just being nominated in four categories is okay for me even though I wish I had won as a plus for me. But then this also puts me in a space where I know that I got four nominations this year so I need to work towards something,” he added.

However, he did not win in any of these categories.